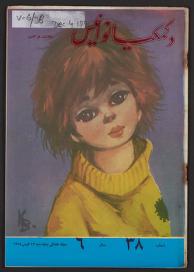 Kamkaya?no ani?s (Ani?s for children) is a magazine for young readers in Afghanistan. Its parent publication, the newspaper Ani?s (first published on May 6, 1927), was named after its first director, Muhyi al-Din Anis (died 1938 or 1939), one of the founders of journalism in Afghanistan. Ani?s is also the word for ""companion"" in Arabic and Persian, so the title Kamkaya?no ani?s can be seen to contain a play on words denoting ""the children's companion."" Kamkaya?no ani?s began in the late 1960s. It was first published under a different title (though with the same meaning), Ku?chnaya?no ani?s, under the direction of Tahir Paknahad. The magazine changed its name to Kamkaya?no ani?s in the early 1970s. At this time, it was a weekly publication that included articles, cartoons, stories, jokes, puzzles, and readers' correspondence. A fair amount of the content was in the form of contributions by its young readers. The major part of the journal is in Persian, while each issue contained several items in Pushto as well. The early editorship of Kamkaya?no ani?s included such well-known journalistic figures as Shukriya Ra'd (who also served as editor of the journal Zhvandu?n). Articles published in the 1970s included occasional references to American culture and society, as can be seen, for example, in essays on farming practices in the United States and on children's television programs. The magazine ceased publishing shortly after the invasion of Afghanistan by the Soviet Union in 1979. It was resurrected in 1990 under the editorship of Muhammad Mahdi Bashir. World Digital Library. Youth magazine."