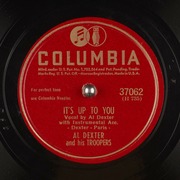 It's Up to You

Al Dexter and his Troopers ; Paris