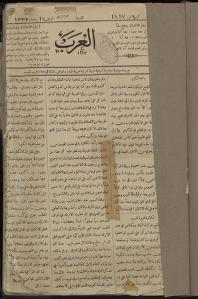 The newspaper Al-Arab (The Arabs) was first published in Baghdad on July 4, 1917, some four months after British troops captured the city from the Turks, thereby ending three centuries of Ottoman rule. The paper appeared at a critical period in the history of Iraq. Issued by the British authorities, it served as a mouthpiece for the British administration at a time of rising Iraqi and Arab nationalism. It depicted the Ottomans as foreigners and the British as liberators and sought to advance broader British military and political strategy against the Ottomans in World War I. The title, masthead (which declared the paper ""Arabic in principle and purpose, established in Baghdad by Arabs and for Arabs""), and content all sought to present the paper as homegrown and Arab in allegiance. An editorial in the first issue described the Turks as ""sons of Gog and Magog, who want to annihilate the Arabs, this good race that in its past served knowledge, progress, coexistence and humanity in an unforgettable manner...."" The paper covered politics, news, history, and literature. It was edited by the theologian and scholar Anistās al-Karmilī, an Iraqi Christian of Lebanese descent. Al-Arab initially appeared every two days but beginning with issue 28 was published every day except Sunday. The paper was at first two pages, with supplements at various times, but it became four pages starting with the January 1, 1918 issue. It ceased publication in May 1920 and was replaced by the newspaper Al-Iraq (Iraq), the first issue of which appeared on June 1, 1920."