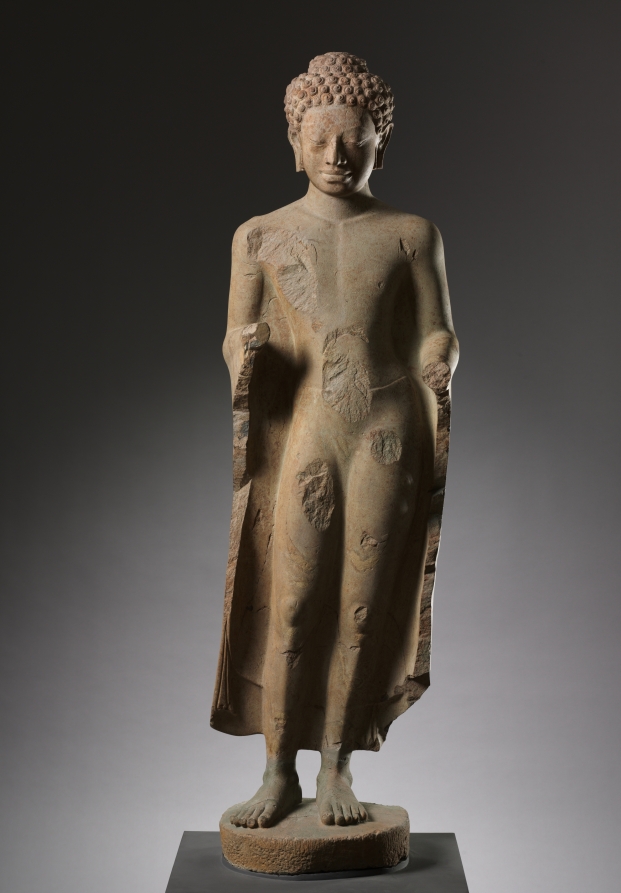 Oggetto: Sculpture
This elegant, monumental sculpture is the earliest type of Buddha image to be made in Southeast Asia. It comes from a site in north-central Thailand that was part of the Dvaravati kingdom (500s–1200s). The body shows direct links with the sculptural traditions at Sarnath in northern India on the banks of the Ganges River. The expression of the face has the peaceful introspection that became canonical during the Gupta period of the 5th century in India. The shape of the head and facial features—unlike Indian precursors—suggest that the artists and patrons of Dvaravati made the Buddha resemble the local Mon population. The figure's stance has been rendered with remarkable fluidity, and the abstracted caps of the knees and minimalist modeling of the pelvis lend the figure an otherworldly, transcendent demeanor, balanced by the approachable smiling countenance.
Fonte: Buddha, 600s. Thailand, probably Shri Thep, Mon-Dvaravati style. Sandstone; overall: 132.7 cm (52 1/4 in.); without tang: 114.2 cm (44 15/16 in.). The Cleveland Museum of Art, Leonard C. Hanna, Jr. Fund 1973.15