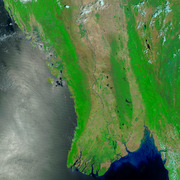 The first cyclone of the 2008 season in the northern Indian Ocean was a devastating one for Burma (Myanmar). According to reports from Accuweather.com, earthobservatory.nasa.gov/NaturalHazards/natural_hazards_v2.php3?img_id=14810 Cyclone Nargis made landfall with sustained winds of 130 mph and gusts of 150-160 mph, which is the equivalent of a strong Category 3 or minimal Category 4 hurricane. News reports stated that at least 10,000 people were killed, and thousands more were missing as of May 5. Flood water can be difficult to see in photo-like satellite images, particularly when the water is muddy. This pair of images from the Moderate Resolution Imaging Spectroradiometer modis.gsfc.nasa.gov (MODIS) on NASA's terra.nasa.gov Terra satellite use a combination of visible and infrared light to make floodwaters obvious. Water is blue or nearly black, vegetation is bright green, bare ground is tan, and clouds are white or light blue. On April 15 (top), rivers and lakes are sharply defined against a backdrop of vegetation and fallow agricultural land. The Irrawaddy River flows south through the left-hand side of the image, splitting into numerous distributaries known as the Mouths of the Irrawaddy. The wetlands near the shore are a deep blue green. Cyclone Nargis came ashore across the Mouths of the Irrawaddy and followed the coastline northeast. The entire coastal plain is flooded in the May 5 image (bottom). The fallow agricultural areas appear to have been especially hard hit. For example, Yangon (population over 4 million) is almost completely surrounded by floods. Several large cities (population 100,000-500,000) are in the affected area. Muddy runoff colors the Gulf of Martaban turquoise. The high-resolution image provided above is at MODIS' maximum spatial resolution (level of detail) of 250 meters per pixel. The MODIS Rapid Response Team provides rapidfire.sci.gsfc.nasa.gov/subsets/?FAS_Myanmar twice-daily images of the region in additional resolutions and formats, including photo-like natural color. BBC. (2008, May 5). news.bbc.co.uk/2/hi/asia-pacific/7384041.stm Burma's storm toll 'nears 4,000.' Accessed May 5, 2008. Washburn, D. (2008, May 2). http://www.accuweather.com/regional-news-story.asp?partner=accuweather&traveler=0&region=worldnews&date=2008-05-02_15:20 Powerful Cyclone Nargis Slams Myanmar. Accuweather.com. Accessed May 5, 2008. Unisys. (2008). Cyclone Nargis, Individual Summary. weather.unisys.com/hurricane/n_indian/2008/index.html 2008 Hurricane/Tropical Data for Northern Indian Ocean. Accessed May 5, 2008. NASA images courtesy the rapidfire.sci.gsfc.nasa.gov MODIS Rapid Response Team. Caption by Rebecca Lindsey.