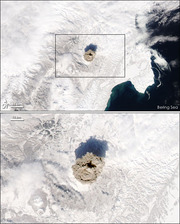 Eruption Of Shiveluch Volcano, Kamchatka Peninsula: Image Of The Day

On March 29, 2007, the Shiveluch Volcano on the Russian Federation's Kamchatka Peninsula erupted. According to the www.avo.alaska.edu/activity/avoreport.php?view=kaminfo Alaska Volcano Observatory the volcano underwent an explosive eruption between 01:50 and 2:30 UTC, sending an ash cloud skyward roughly 9,750 meters (32,000 feet), based on visual estimates. The Moderate Resolution Imaging Spectroradiometer modis.gsfc.nasa.gov/ (MODIS) flying onboard NASA's aqua.nasa.gov/ Aqua satellite took this picture at 02:00 UTC on March 29. The top image shows the volcano and its surroundings. The bottom image shows a close-up view of the volcano at 250 meters per pixel. Satellites often capture images of volcanic ash plumes, but usually as the plumes are blowing away. Plumes have been observed /NaturalHazards/view.php?id=17875 blowing away from Shiveluch before. This image, however, is different. At the time the Aqua satellite passed overhead, the eruption was recent enough (and the air was apparently still enough) that the ash cloud still hovered above the summit. In this image, the bulbous cloud casts its shadow northward over the icy landscape. Volcanic ash eruptions inject particles into Earth's atmosphere. Substantial eruptions of light-reflecting particles can reduce temperatures and even affect atmospheric circulation. Large eruptions earthobservatory.nasa.gov/Study/Volcano/ impact climate patterns for years. A massive eruption of the science.nasa.gov/headlines/y2006/03oct_novarupta.htm Tambora Volcano in Indonesia in 1815, for instance, earned 1816 the nickname ''the year without a summer.'' www.volcano.si.edu/world/volcano.cfm?vnum=1000-27= Shiveluch is a -- a steep-sloped volcano composed of alternating layers of solidified ash, hardened lava, and volcanic rocks. One of Kamchatka's largest volcanoes, it sports a summit reaching 3,283 meters (10,771 feet). Shiveluch is also one of the peninsula's most active volcanoes, with an estimated 60 substantial eruptions in the past 10,000 years.