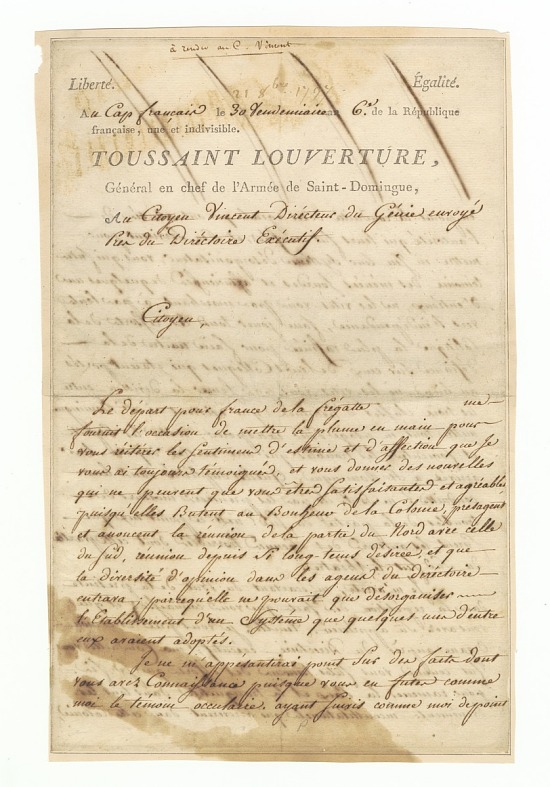 A letter signed by Toussaint Louverture to Charles Humbert Marie Vincent from Cap-Français (now Cap-Haïtien), Haiti, on October 21, 1797. The text itself was recorded by a scribe as Louverture's written French was limited, though the content comprises his own thoughts. At the top of the first page is pre-printed letterhead for Toussaint Louverture, Chief General of the Army of Saint-Domingue. The letter is handwritten in black ink on the front and back sides of two (2) sheets of paper. The contents of the letter are in regards to ongoing conflicts in the French colony of Saint Domingue, later the free nation of Haiti, and military leader Louverture's dissatisfaction with a speech given in the French parliament earlier in 1797 in which Viénot de Vaublanc spoke against abolition and people of African descent as uncivilized.
Medium: ink on paperDimensions: H x W (a): 12 1/16 × 7 13/16 in. (30.6 × 19.8 cm) ; H x W (b): 12 1/8 × 7 13/16 in. (30.8 × 19.8 cm)Object number: 2009.26.2abCredit Line: Collection of the Smithsonian National Museum of African American History and CultureWritten by: UnidentifiedCaption: Toussaint Louverture campaigned tirelessly on behalf of slaves during the Haitian Revolution, and his actions helped push France to abolish slavery in all its colonies in 1794. He wrote this letter in response to a speech in French parliament calling for slavery's restoration on Saint-Domingue. He warned the French that he would fight for Haitian independence if France ever revoked abolition.Signed by: Toussaint Louverture, Haitian, 1743 - 1803Received by: Charles Humbert Marie Vincent, French, 1753 - 1831
Place: France, Europe|Cap-Haïtien, Nord, Haiti, Caribbean, Latin America, North and Central America
Data Source: National Museum of African American History and Culture