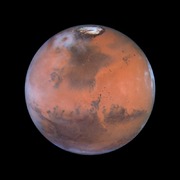 Taking advantage of Mars's closest approach to Earth in eight years, astronomers using NASA's Hubble Space Telescope have taken the space- based observatory's sharpest views yet of the Red Planet. The telescope's Wide Field and Planetary Camera 2 snapped these images between April 27 and May 6, when Mars was 54 million miles (87 million kilometers) from Earth. From this distance the telescope could see Martian features as small as 12 miles (19 kilometers) wide. The telescope obtained four images, which, together, show the entire planet. Each view depicts the planet as it completes one quarter of its daily rotation. In these views the north polar cap is tilted toward the Earth and is visible prominently at the top of each picture. The images were taken in the middle of the Martian northern summer, when the polar cap had shrunk to its smallest size. During this season the Sun shines continuously on the polar cap. Previous telescopic and spacecraft observations have shown that this summertime "residual" polar cap is composed of water ice, just like Earth's polar caps. These Hubble telescope snapshots reveal that substantial changes in the bright and dark markings on Mars have occurred in the 20 years since the NASA Viking spacecraft missions first mapped the planet. The Martian surface is dynamic and ever changing. Some regions that were dark 20 years ago are now bright red; some areas that were bright red are now dark. Winds move sand and dust from region to region, often in spectacular dust storms. Over long timescales many of the larger bright and dark markings remain stable, but smaller details come and go as they are covered and then uncovered by sand and dust. This image is centered near the location of the Pathfinder landing site. Dark sand dunes that surround the polar cap merge into a large, dark region called Acidalia. This area, as shown by images from the Hubble telescope and other spacecraft, is composed of dark, sand-sized grains of pulverized volcanic rock. Below and to the left of Acidalia are the massive Martian canyon systems of Valles Marineris, some of which form long linear markings that were once thought by some to be canals. Early morning clouds can be seen along the left limb of the planet, and a large cyclonic storm composed of water ice is churning near the polar cap.