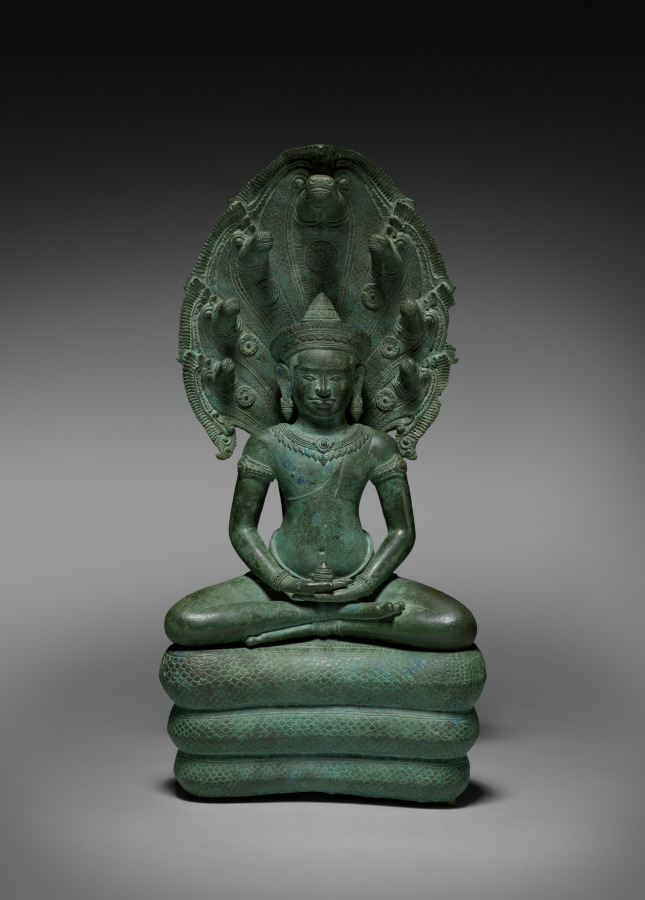 Oggetto: Sculpture
Jayavarman VII, who built the great royal temple at Banteay Chhmar, linked himself with the image of the Buddha seated on a serpent, or naga, as the divine form under which he would be honored.

During his reign, the naga-enthroned Buddha became a ubiquitous image for veneration, often set up together with Lokeshvara, who was associated with his father, and Prajnaparamita, the form under which his deceased mother was honored. Lokeshvara is the powerful enlightened being of compassion, while Prajnaparmita is the goddess who personifies wisdom. King Jayavarman VII, therefore, presented himself as the enlightened Buddha, the product of the union of Compassion and Wisdom, supported and glorified by the naga, which refers to the
Khmer people.

Images of the naga-enthroned Buddha have been found at Banteay Chhmar, both in architectural relief sculpture and as icons in the round. After the death of Jayavarman VII, followers of other forms of Buddhism (for example, Theravada) that became prevalent in Cambodia changed the meaning of the naga-enthroned Buddha and reinterpreted the image to refer to a scene from the historical Buddha’s life story in which a serpent protected him from a flood. The crowned and bejeweled aspect of this Buddha, though, indicates that it is another kind of transcendent figure. In his lap his hands are in a posture of meditation, holding what appears to be an offering of ceremonial rice referring to the hope that he will ensure the prosperity of the land.
Fonte: Naga-Enthroned Buddha, 1100s. Cambodia, Angkor, Angkor Wat Period, 12th century. Bronze; overall: 58.4 x 28 cm (23 x 11 in.). The Cleveland Museum of Art, John L. Severance Fund 1963.263