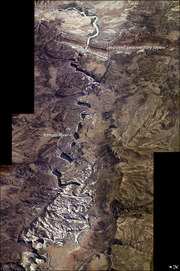 Oblique View Of Dinosaur National Monument: Image Of The Day

In the northwest corner of Colorado, the west-flowing Yampa River meets the south-flowing Green River, which runs into Utah. Stretches of both river canyons upstream and downstream from the junction make up www.nps.gov/dino Dinosaur National Monument. The monument takes its name, of course, from the abundant fossils found in exposed valleys and low ridges of the Morrison Formation, a series of rock layers that were formed late in the Jurassic Period, roughly 145 million years ago. This mosaic of four astronaut photographs illustrates an approximately 47-kilometer (29-mile) section of the monument along the Yampa River in Colorado. The series of images was acquired while the International Space Station was over northeastern Nevada, about 480 kilometers (298 miles) to the west of the center of the mosaic. The oblique (taken from an angle, not straight down), eastward view provides a sense of topography due to shadows and perspective. The generally flat-lying ''layer cake'' geology of the region -- similar to the geology.wr.usgs.gov/parks/province/coloplat.html Colorado Plateau to the south -- is evident in the parallel layers of tan, reddish-brown, and gray-brown sedimentary rocks cut by the Yampa River at the eastern end of the monument (image top). The river drops from a plateau, cutting into the exposed face of a long escarpment, and ripples west between two mountain ridges: Douglas Mountain to the north, and Blue Mountain to the south. Erosion by the Yampa River in this rugged landscape exposed the Morrison Formation and its trove of fossil material, which includes not only dinosaurs but many other animals and plants. Millions of years ago, the remains of the living things -- from bones to leaves -- accumulated in streams and shallow lakes and were swiftly buried by clay, silt, and sand. These sediments were turned into rock over many millions of years as they were buried under newer sediments. The abundant fossils of the Morrison Formation, together with fossils that scientists have found in both older and younger rock layers in the area, make Dinosaur National Monument an important scientific resource that continues to provide new insights into the geologic history and ancient ecology of the region.