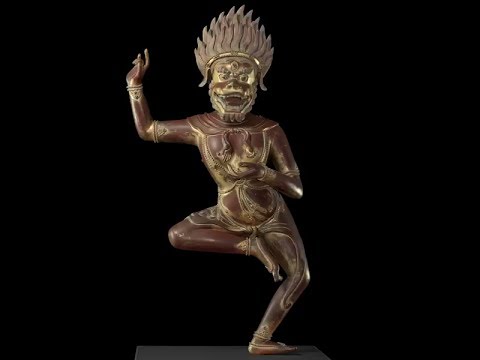 Simhavaktra Dakini, the ferocious lion-faced guardian of Vajrayana Buddhism, is a female “sky-walker” who guides human beings along the right path. This powerful spirit can remove physical hindrances and spiritual obstacles such as pride and ego. When she is portrayed alone, like here, she dances gracefully; her right leg is raised and bent, and her left leg would usually be planted on a prostrate demonic figure, which in this case is missing. Originally she would have held a chopper (a curved, chopping knife) in her right hand and a bowl made from a human skull in her left. These are also missing. She is naked except for jewelry (originally inset with semiprecious stones), a tiger skin is wrapped around her waist, and human skin is knotted around her shoulders. Together with Makaravaktra Dakini (a crocodile-headed dakini), Simhavaktra attends Penden Lhamo, the only female goddess among the Eight Guardians of the Dharma who protect the teachings of the Buddha. She is a special inner protectress of various lineages including the Gelukpa Order and its two leaders, the Dalai and Panchen Lamas.  The size and quality of this piece indicate it was an imperial object made for the Qing dynasty (1644–1911) court in China. Learn more on the Asian Art Museum's education website. Fa parte dell'argomento:
The Himalayas
Tipo di lezione: Video