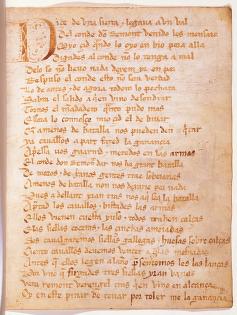 The Poem of the Cid.

The document shown here is the sole surviving manuscript copy of Poema del Cid (The poem of the Cid), the crowning piece of Castilian medieval epic literature and the earliest Spanish epic poem to have survived complete. The poem recounts the story of Castilian nobleman Rodrigo Diaz de Vivar, who lived in the second half of the 11th century. El Cid (meaning lord) battles against the Moors in an effort to restore his honor after being unjustly accused of stealing money from the king. The poem, in its written form, appears to be based on a series of previous oral versions, which must have started spreading shortly after the death of the Cid. The authorship and date of composition are still debated, however, and scholars have put forward numerous hypotheses about the origins of the work. This manuscript, known as the Codex of Per Abat, was copied in the 14th century from an earlier text dated 1207 and signed by Per Abat (Abbot Peter). Several pages of the manuscript are missing, and the text contains corrections and annotations made by different people and at different times. The sole ornamentation in the manuscript is one highlighted capital letter and two feminine heads on page 31 recto, which may represent the daughters of the Cid, who play a prominent part in the story. Many fragments of the manuscript have been blackened by chemicals used in the late 19th century with the intention of heightening the inks and making the manuscript easier to read. The copy was donated to the National Library of Spain in 1960 by the Juan March Foundation, which purchased it from the family of Spanish medievalist Ramo?n Mene?ndez Pidal.