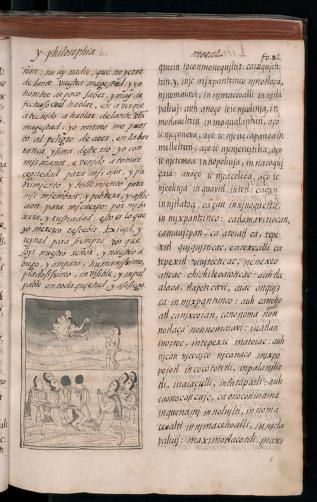 Historia general de las cosas de nueva España (General history of the things of New Spain) is an encyclopedic work about the people and culture of central Mexico compiled by Fray Bernardino de Sahagún (1499--1590), a Franciscan missionary who arrived in Mexico in 1529, eight years after completion of the Spanish conquest by Hernan Cortés. Commonly referred to as the Florentine Codex, the manuscript consists of 12 books devoted to different topics. Book VI is concerned with rhetoric and moral philosophy. It contains texts that Sahagún collected around 1547, in the earliest stage of his research into indigenous culture, from oral recitations by Nahua elders. Known as Huehuetlahtolli (Ancient word), these texts embodied, according to Sahagún, ""the rhetoric, moral philosophy, and theology of the Mexican people, in which there are many curious things exhibiting the beauties of the language and very delicate things relating to the moral virtues."" Although he was repelled by Aztec religion, Sahagún was deeply impressed by the wisdom and beauty of the ancient texts, and he quotes at length, for example, a talk delivered by a Nahua father to a daughter who has reached the age of reason. An illustration of parents exhorting their children is at folio 80r. In the original binding, Book VI was the beginning of the second volume. It thus opens with a dedication to Rodrigo de Sequera, commissary general of the Franciscan Order and a great admirer of Sahagún's work. A similar dedication originally was placed at the beginning of Book I, but it subsequently was torn out and survives only in a later copy of the codex."