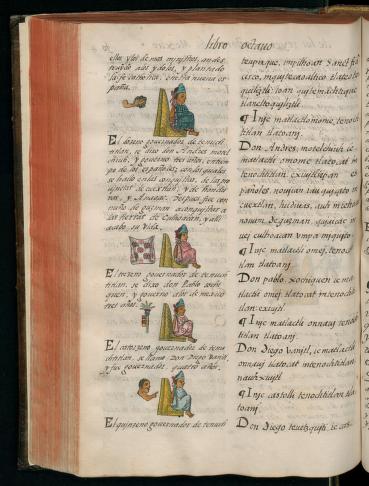 Historia general de las cosas de nueva España (General history of the things of New Spain) is an encyclopedic work about the people and culture of central Mexico compiled by Fray Bernardino de Sahagún (1499--1590), a Franciscan missionary who arrived in Mexico in 1529, eight years after completion of the Spanish conquest by Hernan Cortés. Commonly referred to as the Florentine Codex, the manuscript consists of 12 books devoted to different topics. Book VIII is concerned with kings and nobles, forms of government, elections of rulers, and the customs and pastimes of the nobility. In addition to being interested in these topics for their own sake, Sahagún was motivated by linguistic considerations to describe as many aspects of Aztec life as he could. It was only by doing so, he explained, that he could bring ""to light all the words of this language with their literal and metaphoric meanings and all their manners of speech and the greater part of their antiquities, good and evil."" Book VIII is rich in illustrations relating to the Aztec way of life. The paintings at folios 219, 261, and 280--81 relate to clothing. They show the loom, how clothing was made, and textile patterns worn by the nobility. The majority of the Aztec population could only wear clothes made from agave yarn, undyed and without adornment, but the nobles wore colored cotton clothes decorated with shell or bone-and-feather patches. The illustration on folio 269r shows the game patolli, described by Sahagún as similar to dice, in which the players gambled jewels and other possessions by letting fall three large beans onto a large cross painted on a mat. The illustration on folio 292v depicts tlachtli, a ball game originally linked to the Mesoamerican view of the cosmos as the product of a clash between opposing but complementary forces, such as life and death, day and night, fertility and barrenness, and light and darkness. The struggle was reproduced in the game, as two teams representing opposing cosmic forces faced each other on a court, striving to bounce a heavy rubber ball as many times as possible against the side walls of the court. According to Sahagún, the game was a diversion of the nobility that had lost its earlier religious significance."