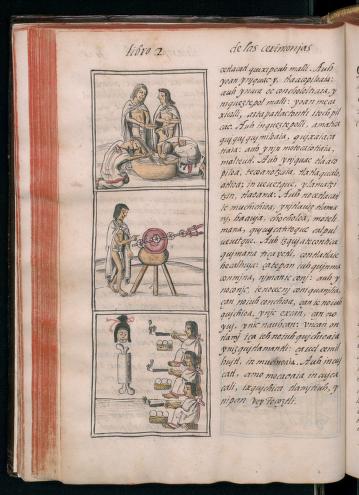 General History of the Things of New Spain by Fray Bernardino de Sahagún: The Florentine Codex. Book II: The Ceremonies.

Historia general de las cosas de nueva España (General history of the things of New Spain) is an encyclopedic work about the people and culture of central Mexico compiled by Fray Bernardino de Sahagún (1499--1590), a Franciscan missionary who arrived in Mexico in 1529, eight years after completion of the Spanish conquest by Hernan Cortés. Commonly referred to as the Florentine Codex, the manuscript consists of 12 books devoted to different topics. Book II deals with the feasts and sacrifices to the gods, made in accordance with the 20-day ritual calendar. It includes the 20 sacred canticles or hymns to the gods, which Sahagún gathered from oral testimony at an early stage in his research. This book also describes ceremonies involving human sacrifice, which so shocked the Spaniards when they arrived in Mexico. Sacrifices were offered so that the cosmic cycle might continue and the sun rise every morning. In a perennial process of regeneration, it was thought that Aztec gods died and then returned to life stronger than before, and it was their death that was ""relived"" in the sacrifice. The gods were embodied in the sacrificial victims-their ixiptla (images) or representatives-and received sustenance from human hearts and blood. The illustration at folio 84v depicts the sacrifice of the ixiptla of Tezcatlipoca, god of the night sky and of memory. The victim was to be a fit young man, without physical imperfections, who was granted a year to live at leisure, learning to play the flute and to carry ""smoking tubes"" in the manner of the chiefs and nobles. He was then carefully dressed and adorned and, after various ceremonies, taken to the foot of the pyramid where he was killed. The sacrificial victims were generally soldiers captured in battle, but they also could be slaves, men found guilty of some crime, or young women or children (offered to the deities of the rain and the waters). In battle, the goal was not to kill the enemy, but to take prisoners, who were grabbed by the hair and destined to be sacrificed. Warfare for the purpose of securing sacrificial victims is depicted in the illustrations on folio 74r and folio 74v of this book."