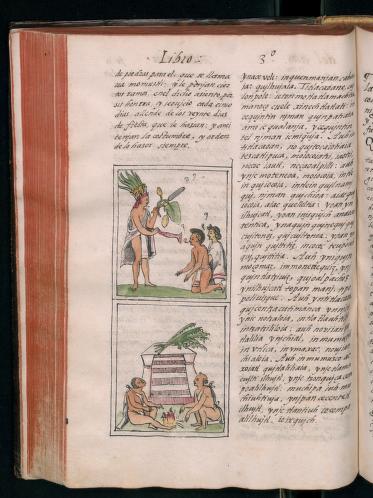 General History of the Things of New Spain by Fray Bernardino de Sahagún: The Florentine Codex. Book III: The Origin of the Gods.

Historia general de las cosas de nueva España (General history of the things of New Spain) is an encyclopedic work about the people and culture of central Mexico compiled by Fray Bernardino de Sahagún (1499--1590), a Franciscan missionary who arrived in Mexico in 1529, eight years after completion of the Spanish conquest by Hernan Cortés. Commonly referred to as the Florentine Codex, the manuscript consists of 12 books devoted to different topics. Book III deals with the origin of the gods, in particular Tezcatlipoca and Quetzalcoatl, and includes appendices on the afterlife and on education. Aztec religion was permeated with stories about the birth, death, and return to life of the gods. This perennial process of regeneration was reflected in ceremonies involving human and other sacrifice and in the architecture of Tenochtitlan. The Templo Mayor (Great Pyramid) was dedicated to Huitzilopochtli and Tlaloc and had separate shrines to each of these gods. This dual construction had great significance in Mesoamerican cosmology, symbolizing the two sacred mountains, Tonacatepetl (the Hill of Sustenance), and Coatepec (the Hill of the Snake). The shrine dedicated to Tlaloc, the god of rain, represented the mountain housing maize and other things that Quetzalcoatl stole from the gods to give to mankind. The shrine dedicated to Huitzilopochtli, the god of war and of the sun, represented the mountain on which the god was born, already an adult and dressed as a warrior, his mother Coatlicue having generated him after she placed a feather ball in her lap. On the mountain the god defeated his sister Coyolxauhqui, the moon goddess, and his 400 brothers who were jealous of his birth. Once dead, they went to form the Milky Way. Among the noteworthy illustrations in Book III is the depiction, on folio 232v, in the appendix on education, of parents taking children to school. The nobles sent their children to the calmecac (row of houses), an extremely strict school reserved for the elite, where they received instructions on how to become ""those who command, chiefs and senators and nobles, ... those who have military posts."""