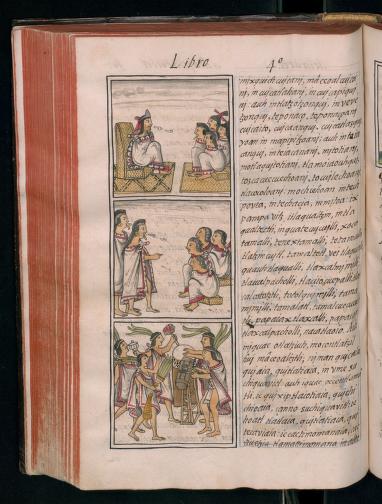 General History of the Things of New Spain by Fray Bernardino de Sahagún: The Florentine Codex. Book IV: The Art of Divination.

Historia general de las cosas de nueva España (General history of the things of New Spain) is an encyclopedic work about the people and culture of central Mexico compiled by Fray Bernardino de Sahagún (1499--1590), a Franciscan missionary who arrived in Mexico in 1529, eight years after completion of the Spanish conquest by Hernan Cortés. Commonly referred to as the Florentine Codex, the manuscript consists of 12 books devoted to different topics. Book IV deals with the art of divination, or judicial astrology as practiced by the Aztecs, and in particular with the Tonalpohualli (ritual calendar). The Mesoamericans used two calendars, one solar and the other ritual. The Xiuhpohualli (solar calendar) had a cycle of 365 days divided into 18 months of 20 days each, plus five days considered inauspicious. The ritual calendar consisted of 260 days and was formed by associating the numbers from 1 to 13 with 20 different signs. A table that was principally used by priests in divination is reproduced in striking detail on folios 329r and 329v. Among the other illustrations in Book IV is a gruesome depiction of anthropophagy, or ritual cannibalism, which often was practiced as part of the rite of human sacrifice. Sahagún describes the sacrifice in relation to the festivals of Xipe Tótec, the god of spring and regeneration, and of Huitzilopochtli, the god of war and of the sun (folio 268r). Prisoners were taken to the temple of Huitzilopochtli, killed, and their flesh consumed by the notables. By means of this practice, the strength of the enemy was consumed and assumed by their captors, in a kind of communion with the dead person and with the gods.