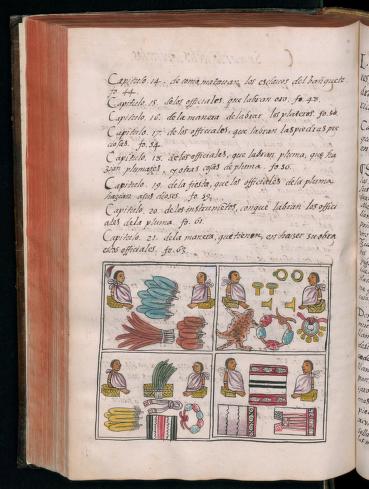 General History of the Things of New Spain by Fray Bernardino de Sahagún: The Florentine Codex. Book IX: The Merchants.

Historia general de las cosas de nueva España (General history of the things of New Spain) is an encyclopedic work about the people and culture of central Mexico compiled by Fray Bernardino de Sahagún (1499--1590), a Franciscan missionary who arrived in Mexico in 1529, eight years after completion of the Spanish conquest by Hernan Cortés. Commonly referred to as the Florentine Codex, the manuscript consists of 12 books devoted to different topics. Book IX is about merchants, officials responsible for gold and precious stones, and feather working. The pochteca (merchants) were an important group in Aztec society. They undertook long journeys in search of precious commodities and goods, and they were valued for the information they gathered in the lands they visited, which the Aztecs often used to plan wars of conquest. Pack animals and the wheel were unknown in Mesoamerica, so goods were carried on foot by tlameme (porters), who placed their loads in a cacaxtli (wooden frame), which was supported by a cord that went around the porter's shoulders and forehead. Folio 316r contains an illustration showing porters with their loads. Arte plumario (feather art) was one of the minor arts practiced in pre-Columbian Mesoamerica. Feather-art products were reserved for the Aztec elite-the king, nobles, priests, and warriors-who wore items such as cloaks, fans, and headdresses principally for ceremonies. Folio 370r has an illustration showing artisans at work on a headdress. Also discussed in Book IX is smoking, which the Mesoamericans did during banquets and religious ceremonies, using both pipes that were filled with herbs and grasses or by smoking cigars made by rolling up tobacco leaves. Smoking is depicted on folio 336r.