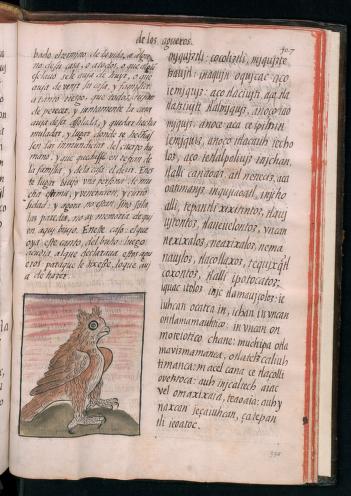 Historia general de las cosas de nueva España (General history of the things of New Spain) is an encyclopedic work about the people and culture of central Mexico compiled by Fray Bernardino de Sahagún (1499--1590), a Franciscan missionary who arrived in Mexico in 1529, eight years after completion of the Spanish conquest by Hernan Cortés. Commonly referred to as the Florentine Codex, the manuscript consists of 12 books devoted to different topics. Book V deals with omens, auguries, and superstitions. As in Book IV, on divination, Sahagún cites ancient native traditions gleaned from questionnaires and interactions with Nahua elders. Sahagún's enduring interest in this subject was scholarly and ethnographic, but fundamentally religious in its motivation. He believed that many of the conversions to Christianity claimed by Catholic priests in Mexico were superficial, and masked lingering adherence to pagan beliefs. As he wrote in the prologue to his work, the ""sins of idolatry and idolatrous rites, superstitions and omens, and superstitions and idolatrous ceremonies have not disappeared altogether. In order to preach against these things or even to be aware of their existence, we must be familiar with how they were practiced in pagan times, [because] through our ignorance, they [the Indians] do many idolatrous things without our understanding it."""