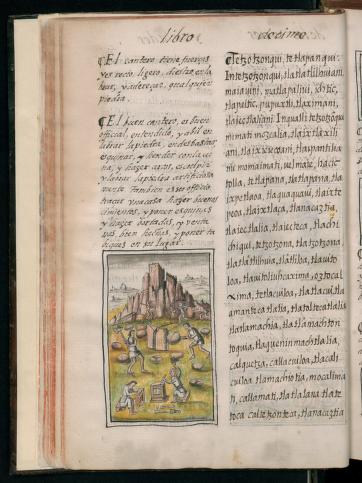 General History of the Things of New Spain by Fray Bernardino de Sahagún: The Florentine Codex. Book X: The People, Their Virtues and Vices, and Other Nations.

Historia general de las cosas de nueva España (General history of the things of New Spain) is an encyclopedic work about the people and culture of central Mexico compiled by Fray Bernardino de Sahagún (1499--1590), a Franciscan missionary who arrived in Mexico in 1529, eight years after completion of the Spanish conquest by Hernan Cortés. Commonly referred to as the Florentine Codex, the manuscript consists of 12 books devoted to different topics. Book X is about Aztec society and covers such subjects as the virtues and vices of the people, food and drink, the parts of the human body, and illnesses and remedies. In this book, Sahagún describes the process of making chocolate from cacao beans, which is also depicted on folio 71v. The beverage made from pure cacao and spices was considered the greatest delicacy, and was reserved only for the nobles. Book X also discusses agriculture and food preparation. The Aztec economy was based mainly on agriculture. Farming was the responsibility of the commoners, who cultivated land assigned to them and the land of the nobles and rulers. The staple crop was corn, from which the Aztecs made a kind of bread. Preparing food was the task of women, and is depicted on folio 315r. While the commoners had a very simple diet, the elite ate richer and more abundant fare. Sahagún includes a long list of dishes flavored with different sauces. The last chapter in Book X, on ""the nations who have come to inhabit this land,"" includes two lengthy texts, derived from Sahagún's questioning of Nahua elders, on the history of Mesoamerica. One tells of Quetzalcoatl and the Toltecs; the other gives an overview of the cultural evolution of the Nahua peoples."