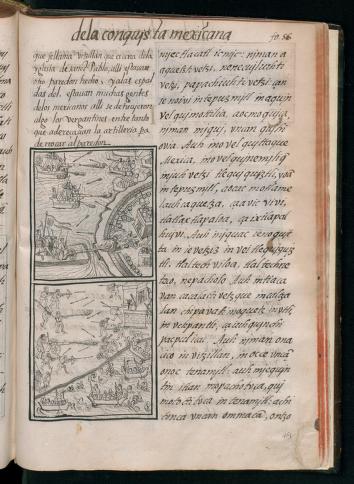 General History of the Things of New Spain by Fray Bernardino de Sahagún: The Florentine Codex. Book XII: The Conquest of Mexico.

Historia general de las cosas de nueva España (General history of the things of New Spain) is an encyclopedic work about the people and culture of central Mexico compiled by Fray Bernardino de Sahagún (1499--1590), a Franciscan missionary who arrived in Mexico in 1529, eight years after completion of the Spanish conquest by Hernan Cortés. Commonly referred to as the Florentine Codex, the manuscript consists of 12 books devoted to different topics. Book XII recounts the Spanish conquest of Mexico, which took place between 1519, when Cortés landed on the coast with just over 100 men and a few horses, and 1521, when Tenochtitlan was taken and the Aztecs subjugated. The story is told from the perspective of indigenous elders who were living in Tenochtitlan at the time of the conquest and witnessed firsthand the events described. Sahagún gathered these accounts around 1553--55, when he was working at the College of Santa Cruz in Tlatelolco. The Nahuatl narrative begins with an evocation of the ""signs and omens"" that were said to have appeared before the arrival of the Spanish and concludes with the surrender of Tenochtitlan after an 80-day siege. By drawing upon primary accounts, Sahagún was able to capture the astonishment felt by the Aztecs and the trauma that followed their defeat at the hands of the Spanish. Among the key factors that determined the Spanish victory were the ruthlessness of the Spanish soldiers and of Cortés in particular, the use of horses and firearms, which the Mesoamericans had never seen, and Cortés's intuition that the peoples of the Aztec Empire were prepared to join forces with him to shake off Aztec rule. Book XII contains numerous illustrations depicting scenes from the conquest, including the arrival of Cortés, an image of the Templo Mayor (Great Pyramid) in Tenochtitlan, battles between the indigenous people and the Spanish, and destruction of Aztec temples by the Spanish."