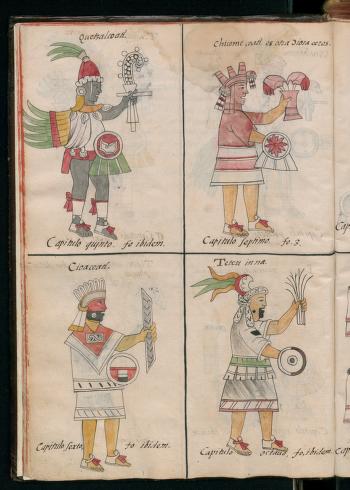 General History of the Things of New Spain by Fray Bernardino de Sahagún: The Florentine Codex.

Historia general de las cosas de nueva España (General history of the things of New Spain) is an encyclopedic work about the people and culture of central Mexico compiled by Fray Bernardino de Sahagún (1499--1590), a Franciscan missionary who arrived in Mexico in 1529, eight years after completion of the Spanish conquest by Hernan Cortés. Commonly called the Florentine Codex, the manuscript came into the possession of the Medici no later than 1588 and is now in the Medicea Laurenziana Library in Florence. Sahagún began conducting research into indigenous cultures in the 1540s, using a methodology that scholars consider to be a precursor to modern anthropological field technique. His motives were primarily religious: he believed that to convert the natives to Christianity and eradicate their devotion to false gods, it was necessary to understand those gods and the hold they had on the Aztec people. Sahagún was repelled by much of native culture, but he also came to admire many qualities of the Aztecs. As he wrote in the prologue to Book I of his work, the Mexicans ""are held to be barbarians and of very little worth; in truth, however, in matters of culture and refinement, they are a step ahead of other nations that presume to be quite politic."" Sahagún gained the assistance of two important indigenous groups: the elders of a number of towns in central Mexico (principales) and Nahua students and former students at the College of Santa Cruz in Tlatelolco, where Sahagún worked for much of his time in Mexico. The principales answered questionnaires prepared by Sahagún about their culture and religion, and their responses were recorded in their own pictorial form of writing. The Nahua students interpreted the images and expanded the answers, phonetically transcribing Nahuatl using Latin letters. Sahagún then reviewed the Nahuatl text and added his own Spanish translation. The whole process took almost 30 years and finally was completed in 1575--77, when Sahagún had a new and complete copy of the manuscript prepared. It then was taken to Spain by Fray Rodrigo de Sequera, commissary general of the Franciscans and a supporter of Sahagún's work. The 12 books of the codex originally were bound in four volumes but later rebound into three. The work is arranged in two columns: on the right is the original Nahuatl text, on the left is Sahagún's Spanish translation. The 2,468 magnificent illustrations, made by the students, are mostly in the left-hand column, where the text is shorter. The illustrations combine the syntactic and symbolic traits of the ancient Nahua tradition of painting-writing with the formal qualities of European Renaissance painting."