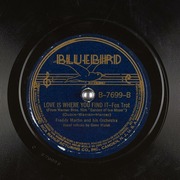 Love is Where You Find It

Freddy Martin and his Orchestra ; Mercer