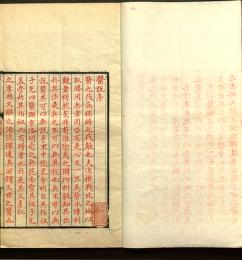 Ten chapters; in black and red ink; the pages with red ink are based on another Song Dynasty edition; postscripts written by Peng Fang and Li Yizhi in 1224. Yi shuo (Talks on medicine) is the work of Zhang Gao, a famous Southern Song dynasty (1127-1279) physician from a medical family of Xin'an, Anhui. The only extant original copy of the work is currently in the National Central Library in Nanjing, formerly Guo xue tu shu guan (Library of Chinese Studies). Presented here is a manuscript copy in red-and-black ink. The pages are mostly in black; those in red ink contain texts taken from other works to fill the gaps in the fragmented Song edition. The work has 10 juan, in 11 volumes. Juan 1 introduces historic physicians, from figures of the ancient Three Sovereigns and Five Emperors (legendary rulers or deities who might have ruled in the third millennium BC) period, such as Fu Xi, Shennong, and the Yellow Emperor, to Qixuanzi (Daoist name Wang Bing of the Tang dynasty). Juan 2 lists ancient medical works, materia medica, acupuncture, and heavenly physicians. Juan 3 covers prescriptions, diagnoses, various fevers, and typhoid. Juan 4-7 discuss various diseases, such as consumption, nosebleed, head wind, eye diseases, difficulty breathing, coughing, heart, throat, abdominal and intestinal illnesses, external wounds, and so forth. Juan 8 contains diagnoses and cures. Juan 9-10 discuss how to nurture life and keep the human body healthy, as well as issues relating to women and infants. A postscript at the end is by Huang Pilie (1763-1825), the prominent Qing bibliophile. Yi shuo also contains the two original postscripts, one by Peng Fang, the other by Li Yizhi, both dated 1224. There is another postscript that is fragmentary, and the red ink has faded somewhat. This Library of Congress copy is the only copy besides the original.