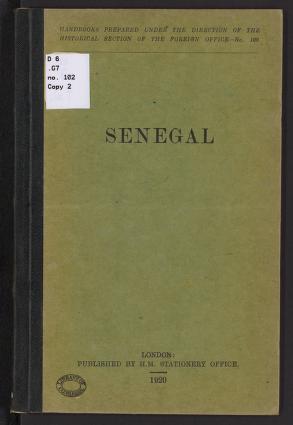 In preparation for the peace conference that was expected to follow World War I, in the spring of 1917 the British Foreign Office established a special section responsible for preparing background information for use by British delegates to the conference. Senegal is Number 102 in a series of more than 160 studies produced by the section, most of which were published after the conclusion of the 1919 Paris Peace Conference. Senegal was one of the oldest and most important of France's African colonies. French activity on the African coast at the mouth of the Senegal River began as far back as 1626, and settlement by the Royal Senegal Company began in the early 18th century. The colony came under British control at times but was restored to France in 1814. By the French government decree of October 18, 1904, Senegal became part of the Government-General of West Africa. The book covers physical and political geography, political history, social and political conditions, and economic conditions. The section on social and political conditions is very brief, as the topics of religious conditions, military organization, and public education in Senegal are covered in Number 100 in the series, French West Africa. The population of the colony is given as 1,259,920 (1916), with the main ethnic groups being the Wolof, Peul (i.e., Pular or Fulani), and Serer. The economic section stresses the importance of the great commercial and naval port of Dakar, which also was linked by rail to the coastal city and port of Saint Louis. Agriculture was the colony's main industry, and ground nuts its primary export. Deforestation and desertification are listed as serious environmental challenges. The colony became the independent Republic of Senegal in 1960.