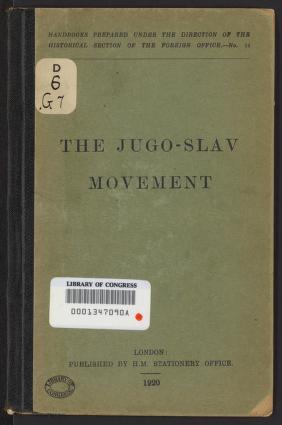 In preparation for the peace conference that was expected to follow World War I, in the spring of 1917 the British Foreign Office established a special section responsible for preparing background information for use by British delegates to the conference. The Jugo-Slav Movement is Number 14 in a series of more than 160 studies produced by the section, most of which were published after the conclusion of the 1919 Paris Peace Conference. The first part of the book deals with the development of the Yugoslav movement before the outbreak of World War I. Topics covered include the ""Jugo-Slav race,"" defined as the Slovenes, Serbs, and Croats, and the development of a Yugoslav national consciousness among the South Slavic peoples of the Austro-Hungarian Empire. It notes the intellectual and literary origins of the Yugoslav movement, which, ""having long remained dissociated from political agitation and even from definite political aims, offers particular difficulties to the Anglo-Saxon imagination."" The second part of the study deals with events during World War I, including the repression by Austria-Hungary of its ethnically South Slavic citizens and the sympathy felt by the Slovenians and Croats for Serbia, Austria's bitter enemy in the war. The study concludes with observations on the prospects for and problems facing the new South Slav state (the Kingdom of Serbs, Croats, and Slovenes; Yugoslavia from 1929) established under the Treaty of Versailles. The appendix includes the text of important documents, including that of the Pact of Corfu, the document issued in London in July 1917 by the Yugoslav Committee proclaiming that after the war the Serbs, Croats, and Slovenes would form a united kingdom under the Serbian royal house."