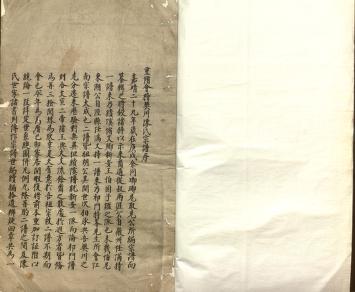 The surname of Chen family originated with Hu Gongman at the time when King Wuwang defeated the Yin Dynasty; Hu Gongman is in the first generation, and Fusi is in the eighty-first generation. This work is a Ming edition of the genealogy of the Chen family from Fanchuan of Kuaiji, in five juan, six volumes, reissued from an original manuscript copy. The compiler was Chen Jia, of the 89th generation of the Chen family during the Jiajing reign (1522-66), a writer and graduate of the first degree. He was assisted by Chen Yong, a scholar in music and medicine, a painter, and calligrapher. This revised edition was further supplemented by Chen Gongyang, of the 91st generation, a police official in Yugan County, Jiangxi Province, in 1633. The genealogy traces the family's founding to Hu Gongman, a descendent of Emperor Shun and a retainer of Wu Wang who established the Zhou dynasty in 1122 BC and granted the state of Chen to Hu Gongman. The Chen families later moved south. One of the branches settled in Fanchuan, Kuaiji, Zhejiang Province. The work contains information on the family up to the 94th-95th generations. The handwritten corrections, deletions, and comments at the head of the pages were the work of later generations during the Qing dynasty (1644-1911). The revised edition contains two prefaces by Chen Jia, one dated 1579 and the other 1580. Chinese genealogical works are historical records that document a patriarchal clan's pedigree, deeds, and events. These works complement the general historical records and thus are an important component for studies of Chinese history and culture.