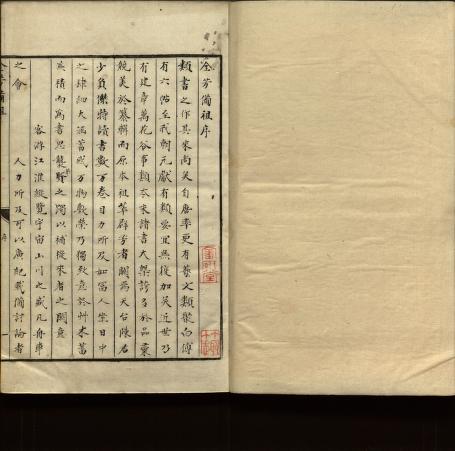 Acquired by Dr. Walter T. Swingle (1871-1952) from Han fen lou, Shanghai; Zhang Jusheng bought the first part of the old manuscript and had it verified; then he put together the second part of manuscript acquired from Han fen lou to complete the item; this then is a complete edition. This botanical encyclopedia of Chinese plants is by Chen Yong, courtesy name Jingyi, style names Feidun and Yuyizi, a native of Huangyan, Zhejiang, of the late Song dynasty. The dates of his birth and death are unknown. He was unsuccessful in his attempt to present to the imperial court his views on policies during the reign of Emperor Lizong (reigned 1225-64), so he devoted himself to writing. By collecting ancient and contemporary records and using his own observations of nature, he composed this work, which he completed in the first year (1253) of the Baoyou era. It was printed in 1256 after additions, deletions, and revisions. It has long been considered the first compendium of Chinese plants. The original inscription reads: ""Compiled by Chen Jingyi of Tiantai, edited by Zhu Mu of Jian'an."" There had been works on herbal medicines prior to the Song dynasty, but this was much superior. Quan fang bei zhu (Botanical encyclopedia of all flowers and plants) consists of two parts in 58 juan. Quan fang in the title indicates the completeness of its inclusion of flowers, fruits, grasses, and trees. Bei zhu in the title indicates the inclusion of facts, verses, ballads and songs, and other sources. The first part contains 27 juan on 128 kinds of flowers, such as plum flowers in juan 1, peony in juan 2, and herbaceous peony in juan 3. The second part has 31 juan, with 179 plants, grouped in seven categories, including fruits, flowers, grasses, trees, mulberry, vegetables, and medicinal herbs. Under each plant are three sections, of which the first contains facts, historical summaries, and miscellaneous works; records various records and documents; explains the names of plants, the yield and ecology, and classical allusions relating to plants. The second section quotes expressions in poetry written by literary and artistic scholars relating to these plants. And the third section contains ballads and songs, each with a heading of the tune name. The first part of this copy is of an old manuscript edition. The second part is a manuscript edition by the Hanfenlou in Shanghai issued in the early years of the Republic. The work was completed by the publisher, Zhang Yuanji (1867-1959). His preface is dated 1925 and it includes the original prefaces by Han Jing dated 1253 and by the author dated 1256. In his preface, Zhang Yuanji indicated that this edition with additions and corrections was specially compiled for Walter T. Swingle (1871-1952), the American botanical specialist. In part 1, the seal impression of Xiang Zijing is a fake. Attached to part 2 is the English translation of Zhang Yuanji's letter to Mr. Swingle. There were a large number of editions of this work, but printed ones no longer exist. This copy is an excellent manuscript edition and is in good condition."