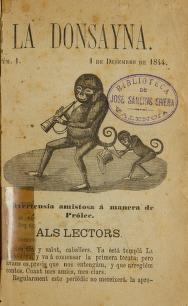 La Donsayna was a Valencian satirical newspaper published in Madrid in the 1840s by Josep Bernat y Baldovi?, who was also its editor, publisher, and main contributor. At the time, Bernat y Baldovi? was a member of the Cortes Generales (General Courts), the Spanish legislature. Other collaborators were Josep Maria Bonilla and Pascual Pe?rez y Rodri?guez. The publication reflects the atmosphere of an era of change, one that could be considered as the beginning of the modern state in Spain as well as in many other European countries. The changes underway included the unification of markets triggered by industrialization and the increased political structuring brought about by the emergence of new administrative units (the provinces) and the advent of the concept of ""homeland"" as an essential constituent of the nation-state. This was also a period of increasing Hispanicization and the consolidation of Spanish as the national language. However, in the case of La Donsayna, the language of choice was colloquial Valencian. The antecedents to this language were popular communications in the form of aucas (cartoons), romances de ciego (orally recited popular ballads), and colloquiers (oral poetry), as well as popular drama. Plays had been part of the various European popular cultures at least since the Middle Ages, almost always in vernacular languages rather than in the official languages imposed in the new modern states by the ruling classes. The newspaper contains dramatic and satirical pieces, which, combined with a marked popular undertone, enables it to reflect everyday life in Valencian lands during the first half of 19th century. One of the ways of portraying the society of the time was to make the characters speak their own language so as to identify their social status: while the populace (the lower social classes) speaks in Valencian, those pretending to a higher social standing communicate in Castilian, albeit with countless mistakes and ""valencianisms."" The use of satire and irony in this way helps to represent the polarization between the well-to-do classes (the landlords and the bourgeoisie) and the common people. The contents of the newspaper present everyday situations by describing familiar scenes, of people, cafe?s, casinos, and houses. Humor is used as a vehicle to draw attention to the air of tension that existed at a time of transition between two worlds, from rural life to the new urban society. La Donsayna was published weekly. Presented here are the 13 issues that appeared from December 1, 1844, to February 23, 1845."