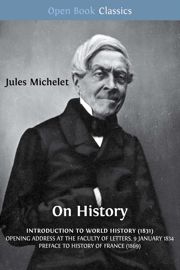 Edited by Lionel Gossman, this volume contains three programmatic essays by Michelet. The first two are available here for the first time in English translation. The third, the Preface to the 1869 edition of the Histoire de France, originally published in its first English translation by Edward K. kaplan in his Michelet's Poetic Vision (1977), has been revised by the translator for this volume. One of the greatest Romantic historians and immensely popular during his lifetime, Jules Michelet (1798-1874) fell into disfavor among the positivist historians who came after him and who regarded his work with disdain as "literature". In the 1920s and 30s, however, he began to be rediscovered and rehabilitated by the members of the influential Annales school. The objects of Michelet's interest - living conditions, popular mentalities, laws and the arts, the historian's relation to the objects of his study, no less than political history - have since come to occupy a central place in modern historical research. A free online-only supplement contains an essay on Michelet by John Stuart Mill from the Edinburgh Review (January 1844) and several studies of Michelet by Lionel Gossman.