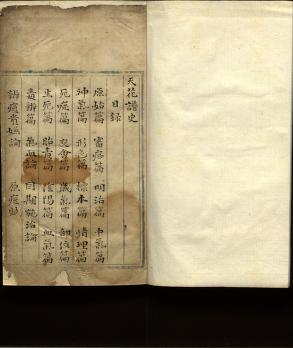 This copy, in three juan, two volumes, is a work on smallpox written during the Ming dynasty (1368-1644). Chinese medicine underwent great development in many areas at that time, including in the diagnosis of diseases, case-writing formats, compilation and dissemination of medical treatises, discussion of medical theories and ethics, and research on medical history in China. Already in the early Ming period infectious and non-infectious diseases were identified and given precise descriptions and treatments. Besides plague, smallpox was the great pestilence of this period, and the widespread use of anti-smallpox inoculation in the 17th century is well documented. Smallpox did not spare some of the Chinese emperors, among them Emperor Kangxi, who survived the disease and ruled the country for 60 years from 1662 to 1722. The author of this manuscript was Leng Kaitai, a Ming-dynasty physician, about whom very little is known. According to the title inscription, Leng's style name was Xuanzan, and he was a native of Yunyang County, Sichuan Province. However, his name cannot be found in the local gazetteers of Yunyang. The work has no prefaces or postscripts. Juan one contains 30 essays or prose poems, juan two has 22 essays, and juan three has 27. These essays deal with a wide range of topics related to smallpox, including its symptoms, differences in symptoms between adults and infants, diagnoses of patients, among them women and pregnant women, degrees and stages of the disease, and various treatments. A number of the entries are written in verse, such as one with the title Fang miao fu (Verse on powdered scabs). The verse form in Chinese medical books was rooted in the oral tradition and was used to make it easier for treatments to be memorized and to reach larger numbers of people.