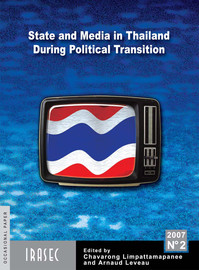 State and Media in Thailand During Political Transition

The emergence of public opinion in Thailand through media was a sign of the development of modernity in the Kingdom. Growing influence of the public opinion raised a double question to local authorities: Media tended to spread western concepts, such as “democracy” or “freedom”; which could be integrated to the local traditions; they could also set the bases of a modern state. By law or ownership concentration authorities have regularly attempted to grip on independent media. Nowadays debates on press freedom in Thailand are a new development of this long lasting antagonism. On the initiative of the French and German Embassies in Thailand, Irasec with the National Press Council of Thailand organized on May 23rd, 2007 a seminar on the relationship between State and Media in Thailand at the Thai Journalist Association. This seminar occurred at a very specific time in Thai modern politics. Since the beginning of the political crisis late 2005 and especially after the Coup d'Etat on September 2006, Thailand has committed to a long process of reforms and political reconstruction which is supposed to be followed by the approval of a new constitution by referendum. This should be the 18th Constitution since the founding of the modern State in 1932. However interrogations and worries remain over the whole process. During this political transition the role of media is particularly sensitive. The current situation in Thailand emphasizes concerns for press freedom. State censorship, self-censorship, media ownerships and ethics are of highest interest and worriment, and widely discussed in the frame of the Constitution drafting. Despite a high degree of freedom, notably in print media - a more worrisome situation is looming regarding radios, TV and especially internet, uncertainty and retrograde reforms could further damage the reliability of Thai media.