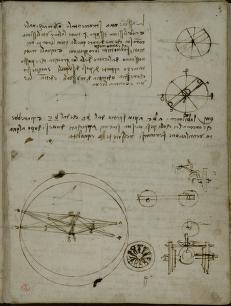 Codex on the Flight of Birds.

In addition to creating masterpieces of Renaissance art, Leonardo da Vinci (1452-1519) was interested in technology. He developed plans for a number of inventions, some with potential military uses, including a kind of armored tank and a deep-sea diving suit. Of the many subjects that Leonardo studied, he was particularly fascinated by the possibility of human mechanical flight. He produced more than 35,000 words and 500 sketches dealing with flying machines (he envisaged both a glider and a helicopter), the nature of air, and the flight of birds. In Codice sul volo degli uccelli (Codex on the flight of birds), produced in 1505-6, Leonardo outlined a number of observations and concepts that were to find a place in the development of a successful airplane in the early 20th century. The codex illustrates his extraordinary command of a broad range of knowledge, theories, and ideas across the spectrum of art and science. The pen-and-ink drawings reflect his ability to analyze a wide variety of topics, including how mechanisms function, the principles of casting medals, gravity, the effects of wind and currents on flight, the function of feathers, how wing movements compress the air, the action of a bird's tail, and other subjects. The notebook presented here also contains architectural sketches, some diagrams, and designs for machines, but most of its 37 pages are filled with Leonardo's detailed notes and drawings on bird flight and his analysis of how birds keep their balance, move, steer, dive, and ascend in flight. The analysis is presented in Leonardo's characteristic mirror writing, in which the text runs from right to left, with the individual letters reversed. Giorgio Vasari wrote of Leonardo's notes: �whoever is not practiced in reading them cannot understand them, since they are not to be read save with a mirror.� The early modern history of this manuscript is complicated. Five folios were removed from the codex and sold in London in the mid-19th century. The heirs of Giacomo Manzoni di Lugo bought the major part of the codex in 1867 and sold it to Teodoro Sabachnikoff, a Russian scholar of the Renaissance, who also came to possess one of the folios from the London sale. In 1892, the year that he bought the folio, Sabachnikoff published the first printed edition of the codex, with folio 18 (the one he acquired in London) added as an appendix but still lacking the four folios that had been detached and sold to other buyers. On December 31, 1893, Sabachnikoff gave the work to Queen Margherita of Italy, who in turn passed it to the Royal Library of Turin. Folio 17 was added to the codex in 1913. Enrico Fatio, a Geneva collector, bought the last three folios (1, 2, and 10) and several years later presented them to King Victor Emmanuel II, through whom they were joined to the rest of the work. The codex was bound in 1967. It remained uncatalogued and stored in a safe until February 1970, when it gained the class mark Varia 95, once belonging to an illuminated Book of Hours, which was found missing during an inspection in 1936. The codex was displayed at the Smithsonian National Air and Space Museum in Washington, DC in 2013.