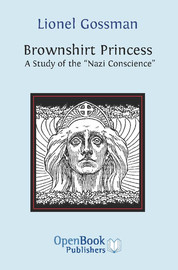 Princess Marie Adelheid of Lippe-Biesterfeld was a rebellious young writer who became a fervent Nazi. Heinrich Vogeler was a well-regarded artist who was to join the German Communist Party. Ludwig Roselius was a successful businessman who had made a fortune from his invention of decaffeinated coffee. What was it about the revolutionary climate following World War I that induced three such different personalities to collaborate in the production of a slim volume of poetry — entitled Gott in Mir — about the indwelling of the divine within the human?