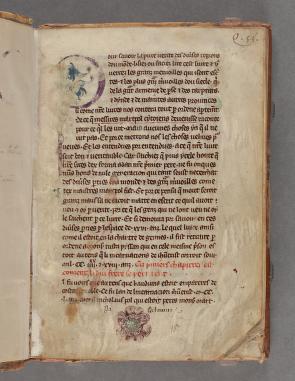 The Travels of Marco Polo.

This manuscript from about 1350 is one of the oldest extant copies of Les voyages de Marco Polo (The travels of Marco Polo), the account by the Venetian merchant Marco Polo (circa 1254-1324) of his adventures in Central Asia and the Far East during the latter part of the 13th century. It is possibly one of five manuscripts relating to Marco Polo's journey that belonged to King Charles V of France (reigned 1364-80). Later it was part of the library of the French book collector Alexandre Petau. It was sold to Queen Christina of Sweden (1626-89) in 1650. Accompanied by his father Niccolo? and his uncle Maffeo, Marco Polo travelled overland to China in 1271--75. He then spent 17 years serving Kublai Khan (1215--94), grandson of Genghis Khan and conqueror of China, for whom he undertook assignments in China as well as in South and Southeast Asia. The three Venetians returned to their native city by sea in 1292--95. Marco Polo soon was caught up in the war between Venice and Genoa, for which he equipped and commanded a galley in the Venetian navy. He was taken prisoner by the Genoese in 1296. According to tradition, while in prison he dictated the stories of his travels to a cellmate, Rustichello da Pisa, who wrote them down in Old French. Marco Polo's account was not just a simple record of the journey, but a description of the world-a mixture of a travel report, legend, hearsay, and practical information. For these reasons, Les voyages de Marco Polo is sometimes called Divisament du monde (Description of the world) or Livre des merveilles du monde (Book of the marvels of the world). The work was an important introduction for Europeans to the history and geography of Central Asia and China. At the end of the Stockholm manuscript is a mappa mundi, a medieval schematic zonal map of the world, which, however, may be a later addition.