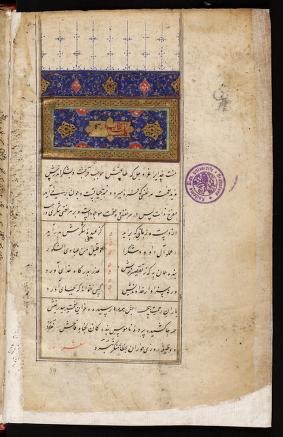 The Persian poet and scholar Muṣliḥ ud-Dīn Sadī Shīrāzī (circa 1213-1292) is known primarily as the author of Gulistan (The rose garden), one of the great masterpieces of Persian literature, which he completed in 1259. The work has a didactic and ethical character, and is still widely read, in the original Persian and in translations in many languages. This manuscript copy is written in the ta'liq script in two different hands, and contains numerous explanations and remarks in the margins and in the text. The manuscript is dated 1585 (993 A.H.). The manuscript is from the Bašagić Collection of Islamic Manuscripts in the University Library of Bratislava, Slovakia, which was inscribed on the UNESCO Memory of the World register in 1997. Safvet beg Bašagić (1870-1934) was a Bosnian scholar, poet, journalist, and museum director who assembled a collection of 284 manuscript volumes and 365 print volumes that reflect the development of Islamic civilization from its inception to the early 20th century. The manuscript is item 586 in Jozef Blaškovič, Arabské, turecké a perzské rukopisy Univerzitnej knižnice v Bratislave (Arab, Turkish, and Persian manuscripts in the University Library, Bratislava).