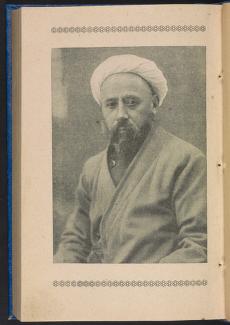 Numūnah-ʼi Adabīyāt-i Tājīk (Collection of Tajik literature) is a compendium of poetic works by medieval, early modern, and modern Tajik poets. It was compiled and edited by Sadriddin Aini (1878-1954), who is considered a national poet in Tajikistan and was by far the most literary of the Tajik nationalists. The work was published in Moscow by the Central Press of Soviet Socialist Republics in 1926, just two years after the creation of the Tajik Autonomous Soviet Socialist Republic. Each work in the compendium is well known and available in other collections and volumes published in the Persian-speaking world; collectively these works represent the Persian literary tradition in the Persian-speaking regions of Central Asia. The compendium includes a biographical entry on Aini by the Iranian nationalist political activist Abolqosim Lohuti, a preface, and three main sections. The first section includes representative works by 80 medieval and early modern Persian poets, including Rudaki, Daqiqi, Farabi, Alisher Navoii (or Nawa'i), and others. The second section discusses the poetic works of 132 Persian-speaking poets from the late-18th and 19th centuries. Section three deals with what Aini calls the ""new Tajik literature"" produced between 1905 and 1925. These later poems deal with the discourse on modernization, known in Central Asian studies as Jadidism, and the social and political developments that took place in the region as a consequence of the Bolshevik Revolution. Three pictures of Aini appear in the book. Each section begins with a short preface and ends with a list of contents. Aini provides a biographical entry about each poet's life and career. Publication of the compendium was a state-sponsored project carried out during a crucial period of history when many of the countries that today are independent nation-states in Central Asia were established as parts of the Soviet Union under a policy of ""national delimitation."""