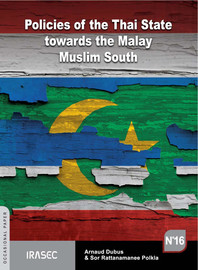 It was one of these landmark special programs at the Foreign Correspondents Club of Thailand, on the top floor of the Maneeya Centre Building, in the upscale commercial heart of Bangkok, where Major General Pichet Wisaijorn was the exclusive guest speaker on that evening of November 2009. Many of the journalists, both Thai and Foreign, were present and Khun Roong and the other staff at the bar were working non-stop, dropping pizza here and glasses of dark beer there. Expectations were high. Pichet was the Fourth Army Region commander, which includes the three “problematic provinces” of Pattani, Yala and Narathiwat, plus a few unruly districts in the Songkhla province. Since 2003, thousands of people, rubber tappers, insurgents, traders, school teachers, civil servants, police officers, military personnel and some foreigners had been killed in a maelstrom of violence linked to what was officially called the “separatist insurgency” by the authorities as well as linked to the mafia culture prevailing in this region. The trafficking of women, drug peddling, extortion, smuggling of palm oil and cheap electronic items from Malaysia have always been rife in the deep South. This mafia culture is prevailing in many of Thailand's 77 provinces, but the total breakdown of law and order in the South makes it worse. Many in the audience were thinking that General Pichet would deliver some answers to the most important questions which have puzzled journalists, businessmen and other residents for years: who leads the insurgency? What are their objectives? How the movement is structured, or is it even structured at all? What is the division of power between the Southern Border Provincial Administrative Committee, the armed forces, the local administration and the central government? Have there been any attempts to negotiate with the insurgents? But the presentation of Pichet was rather disappointing. What is the direction of their policy? Pichet repeated the royally endorsed recipe: khao chai, khao teung, pattana (“understand, reach out and develop”). With its supreme and unquestioned wisdom, this “magic formula” is supposed to throw the listeners in deep awe and reverence. But the mantra had long become a poor PR tool to answer the questions of journalists and diplomats on field visits in sam changwat pak tai, the three provinces of the South.