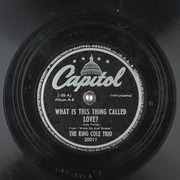 What Is This Thing Called Love?

"Performer: The King Cole Trio Writer: Cole Porter Instrumental; From ""Wake Up And Dream"". Digitized at 78 revolutions per minute. Four stylii were used to transfer this record. They are 3.8mm truncated conical, 2.3mm truncated conical, 2.8mm truncated conical, 3.3mm truncated conical. These were recorded flat and then also equalized with Turnover: 400.0, Rolloff: -12.0. The preferred versions suggested by an audio engineer at George Blood, L.P. have been copied to have the more friendly filenames. Matrix number: CAP-185A Catalog number: 20011 Other IDs from the record include: (185-A); Album A-8 The recording on the other side of this disc: Prelude In C Sharp Minor ."